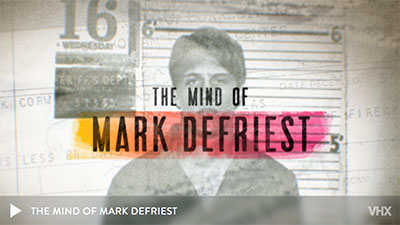 Jailed for Stealing Tools in 1980, ‘Prison Houdini’ Is Denied Release

Compelling …. London turns the portrait of an escape artist into a powerful indictment of the American prison system.

A chilling, timely, often darkly and unexpectedly humorous look at one man’s brutal experiences in the American prison system

The Mind of Mark DeFriest is a powerful and sometimes even darkly comic look at a situation gone disastrously awry.

Like many of the best documentaries, ‘The Life and Mind of Mark DeFriest’ recounts a real-life story that’s stranger than fiction.

Director, Advocates Push Freedom For the So-Called ‘Houdini of Florida’

A rousing end to another successful Naples International Film Festival »

Florida State Prison’s ‘Houdini’ up for parole; film asks you to vote »

A Few Potential Oscar Contenders from the L.A. Film Fest »

Interview with Gabriel London starts at 30:17 into the podcast »

Film Review: A bizarre story gets an absorbing telling in Gabriel London’s documentary »